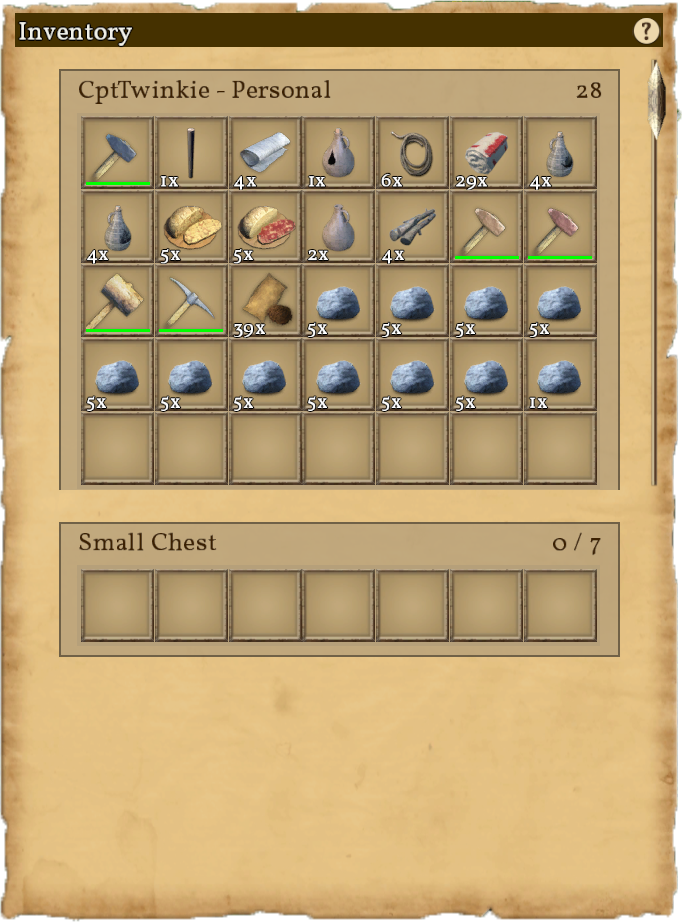 Inventory and Crafting are part of a single whole in Medieval Engineers. Crafting cannot work without an inventory and so the screen is shared between them. In a technical sense, inventory works as a container with a number of slots. These slots can be filled with Inventory Items or stacks of inventory items. What exactly defines an inventory item and whether or not it stacks is more of a technical matter suited to modding than to how to use inventory. In a practical sense, nearly everything can be placed in inventory or broken down into something that can. Large Blocks, large trees, and the ground itself are examples of things that cannot be placed into inventory without modifying them in some way.

. For most loose items, pressing

will pick them up. For items attached to things, holding

is usually required. These actions are not uniform for both technical and gameplay reasons. If you build a cart, you don't want to destroy it by accidentally tapping the wrong key.

Most external inventories have constraints placed upon them that restrict the types of items that can be placed there. These constraints vary greatly for each inventory container. See Category:Inventory/Blocks for specifics on any particular block.

. Usually, the block or NPC will have a highlight when you aim at it indicating that it is interactive.

) on them. This put them in the first stack of like items, assuming it's not full, or in the first open slot available. This method is also not very complicated but it does have some drawbacks in crafting inventories.

There are other transfer options using modifier keys:

: Move all items of selected type to the next inventory.

: Move half of the item stack to the next inventory.

: Move one item from stack to the next inventory.

drag: Move half of the item stack.

drag: Drag an item and enter the amount to move.

symbol in an inventory screen.

drop button. Either drag the item to the button or select the item and click the button. 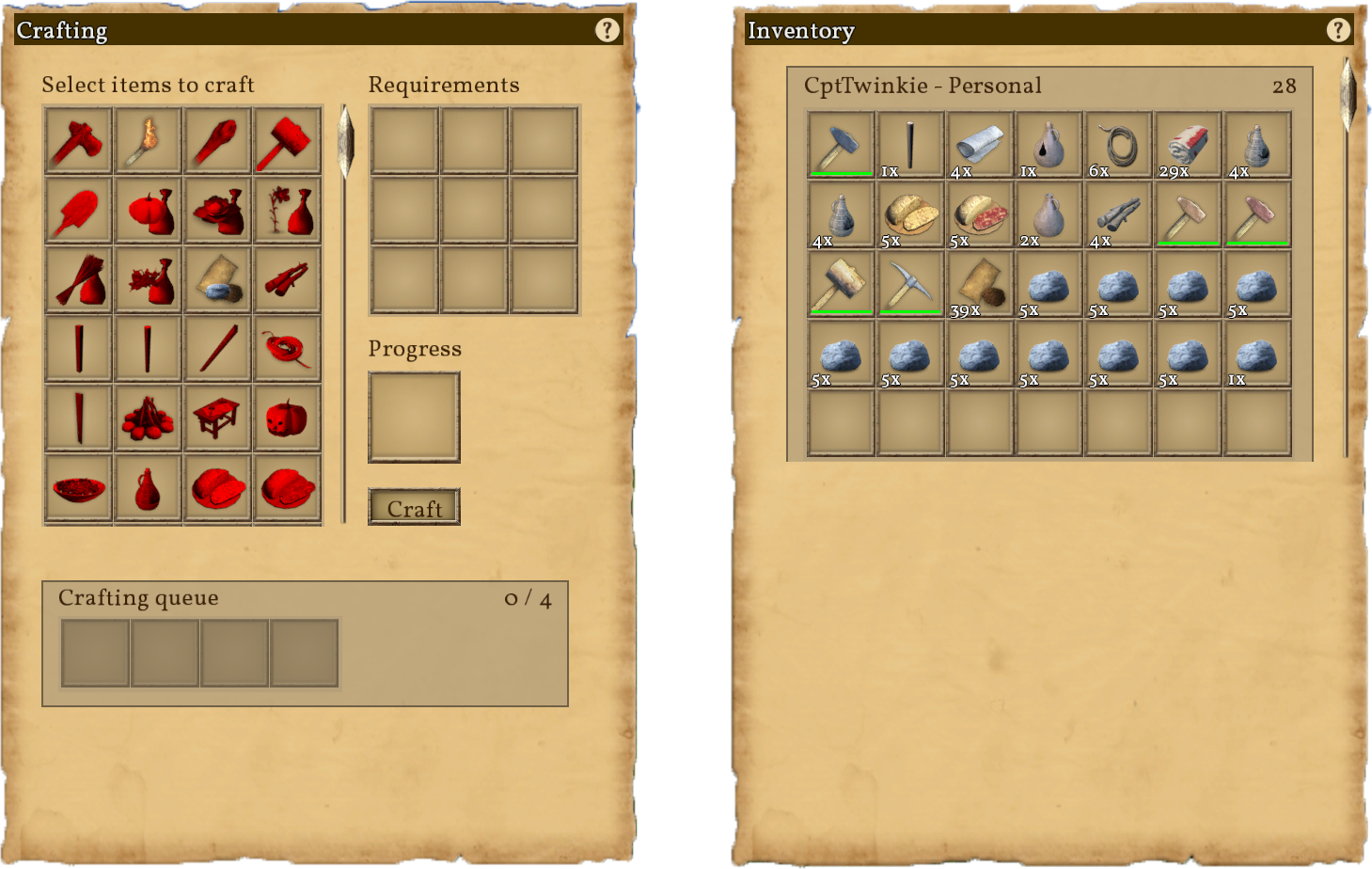 The crafting screen may appear complex at first sight but it is actually rather simple in its function. At the top left under "Select items to craft" there are crafting recipes that are available at this time. You may notice that some or all of them are red in color. This indicates that, although the recipe is unlocked, you lack sufficient resources in your inventory to craft the recipe.

If you click on a recipe you will see items appear in the "Requirements" section. These are the ingredients needed to craft the recipe. They also appear red in color if the ingredients are missing. Once you add all of the ingredients the Requirements and the recipe will no longer appear red. You can then click the Craft button to begin crafting the recipe. The required ingredients will be removed from your inventory and the recipe will show in the "Progress" box. You will notice that a brown highlight will begin filling the progress box from left to right. When the highlight reaches the right side the craft will be complete and the new item(s) will appear in your inventory. This basic progress is how all crafting is done.

You can cancel a craft that is in progress by using

on the progress box. The requirements will be returned to the character's personal inventory.

upon them. There is no way to re-order the queue at this time. To change the crafting order, remove the recipes and add them again in the new order.

is required. This makes it faster when queing many items.

production queue: Remove one item from a queue stack.

symbol in a crafting screen. 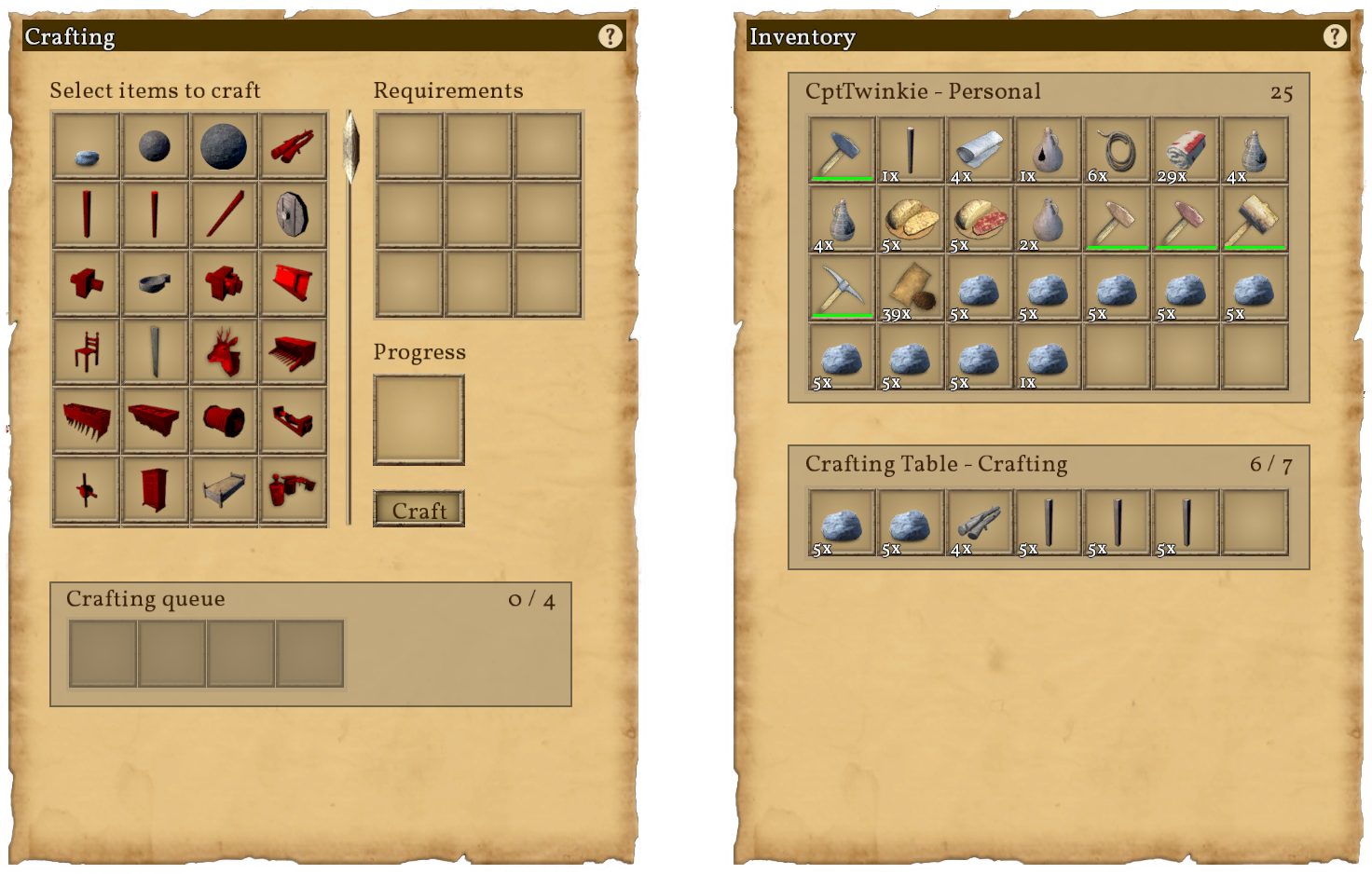 External Inventory and Crafting of

. Usually, the block will have a highlight when you aim at it indicating that it is interactive.

Campfire, this power is provided by fuel. These stations have two inventories, a crafting inventory and a fuel inventory. must be placed in the fuel inventory or the station will not craft. Additionally, there is a "Fuel" box on the crafting screen and a Light button. While crafting, the currently burning fuel will be displayed in the fuel box with a highlight that moves from left to right, not unlike the Progress box. This represents the fuel being consumed. Once a fuel is added the fuel box it is not retrievable. The Light button will become a Douse button while the fires burn in the crafting station. Clicking Douse will douse the fire or, to say it differently, it will put the fire out. Clicking light will start the fire again. For convenience, when a recipe is added to crafting, the fire will be automatically lit if there is fuel available. Also for convenience, if recipes are queued for crafting and there is no fuel, the fire will be automatically lit when fuel is added to the Fuel inventory.

Many powered crafting stations have three inventories, such as the

One caveat of having multiple inventories in a single block is that it creates complications for inventory transfers. When using

to move an item to a block with multiple inventories it will try to add it to the first inventory, in order, that will accept the item based on the inventory's constraint. If you are unfamiliar with the constrained items for a particular inventory this can be confusing at first. The constraints are set so that, in most cases, common fuels will not be accepted into the Crafting inventory. That way using

on it, that doesn't mean it won't accept it. If an item works as fuel then it can be used as fuel anywhere. You may have to simply drag it into the Fuel inventory.
Retrieved from "https://medievalengineerswiki.com/index.php?title=Inventory_and_Crafting&oldid=14932"
Categories: