In this two-part tutorial, we will go through the basics of making a simple mod that includes some of the new functionality added in 0.5, like custom data classes and our new tool system. We will assume a basic knowledge of C#, though we will try to make it as easy as possible.

We will be making a modification to the shovel. We are going to add a new key to it that the user can rebind in the Bindings screen, and when they press it the shovel will tell you how far you are from the center of the planet, in meters.

Tools required for this mod:

First, we will have to create the appropriate folder structure for the mod. Go to %appdata%\MedievalEngineers\Mods, you will probably see a folder containing many .sbm files, provided you used mods in the past, and it will probably look something similar to this: 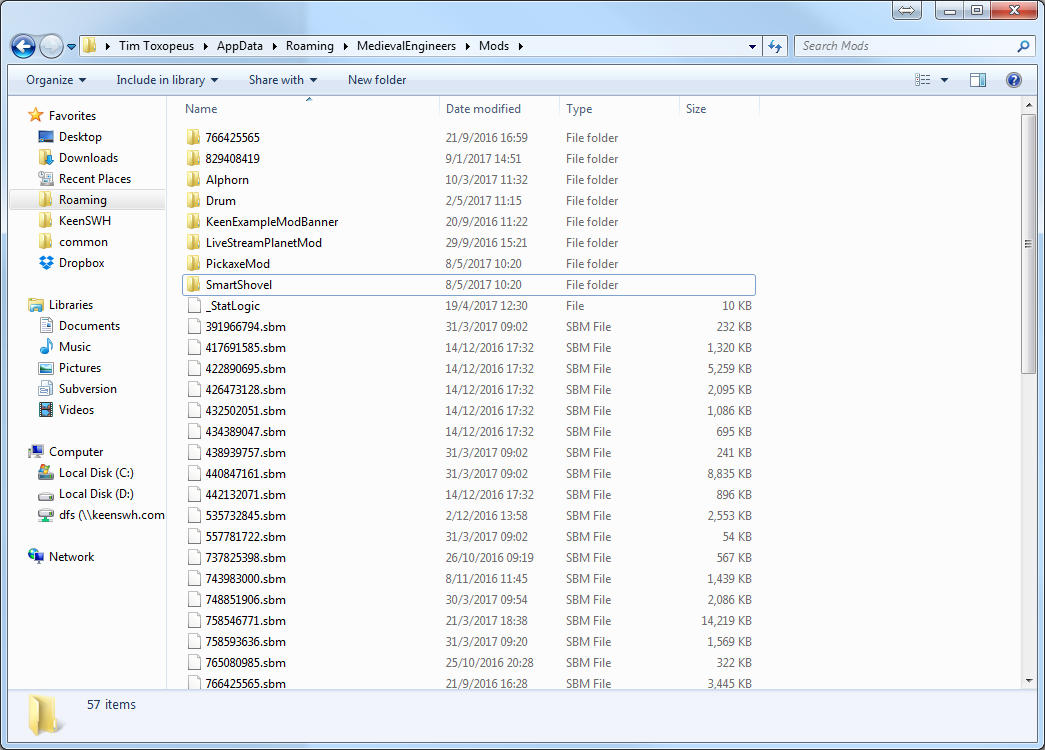 The folder structure we recommend for mods is identical to our format. In the mod root, put a Data folder that will contain SBC files. Inside the Data folder put the Scripts folder for C# scripts. In the mod root, folders for Models, Textures, etc can exist as well. Take a look at our steamapps/common/MedievalEngineers/Content folder for more examples.
Tip 01: Folder structures

Make sure to double-check the names of the folders! It is important that they are called Data and Scripts, as that is where the game will look for specific files! They are case sensitive.
Warning 01: Folder names

If you load up the game now and go to new world -> setup mods, you should now see your mod in the left list. Double-click it to move it to the right list, and click Ok. 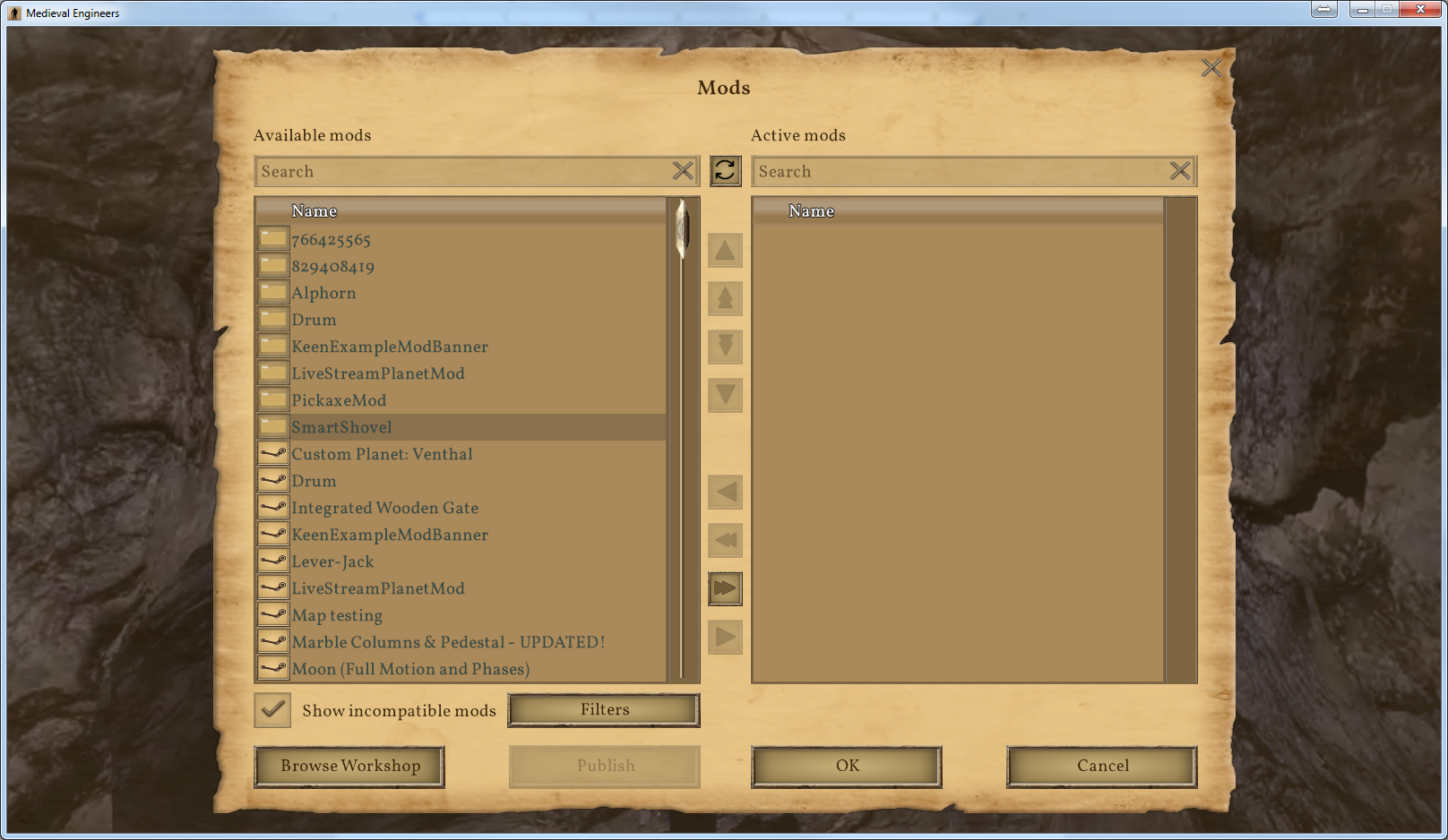 Then, make sure the world is set to Creative, and Online Mode is set to Offline, otherwise, the mod won’t load. 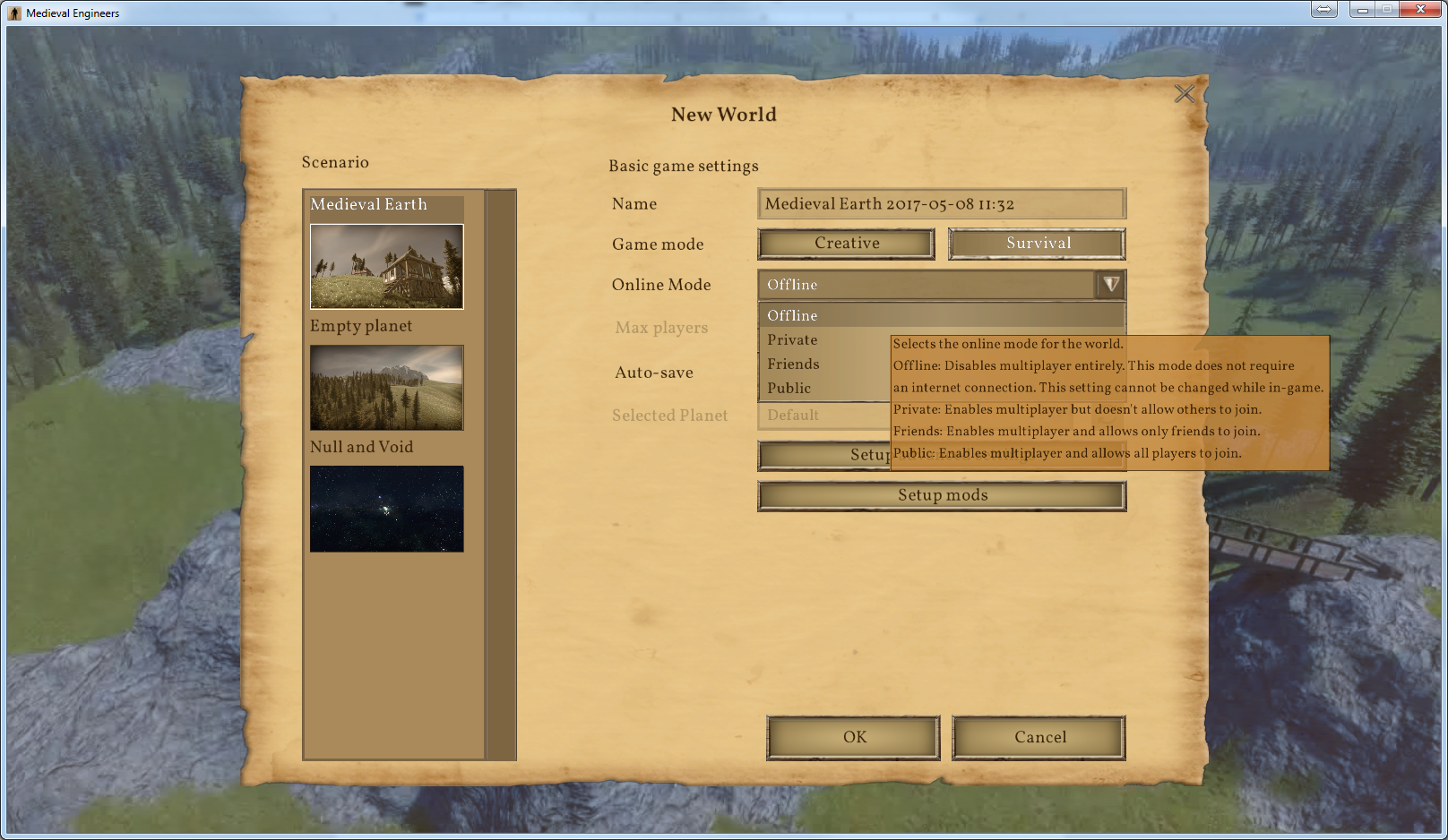 Click Ok, and watch it load up the world! Great, but obviously, this doesn’t actually do anything. So let’s get to solving this.

Exit the game, and go into the Data folder. First, we will set up the control binding.

In your Data folder, create a file called Controls.sbc and put the following snippet of XML in there:

The control definition format is pretty simple. DisplayName is the text that is used in the keybindings screen to show you the control, Description is the tooltip that shows up when you mouse over it, Category tells it which category to put it in, and Primary (and Secondary) describes the default key used. We bound it to Z, but you can change it to another key if you like. :-) We recommend you make your own category, so players won't confuse your custom key binds with our vanilla ones.

The Primary and Secondary tag can take a wide array of attributes, the full list is Key, MouseButton, MouseAxis, GamepadButton, JoystickAxis, Control, Shift, and Alt. The last three are booleans that are false by default, but if you set them to true they are modifier keys. You can find examples of these in the Controls.sbc in the base game’s data folder.
Tip 02: Control Definition Attributes

Now load up the game, click on Continue to load your world containing your mod*, and if you press Escape and go to Options -> Bindings, and look in the Tools category, you should see the new keybind there!

*Modded keybindings are not available before loading the modded world. 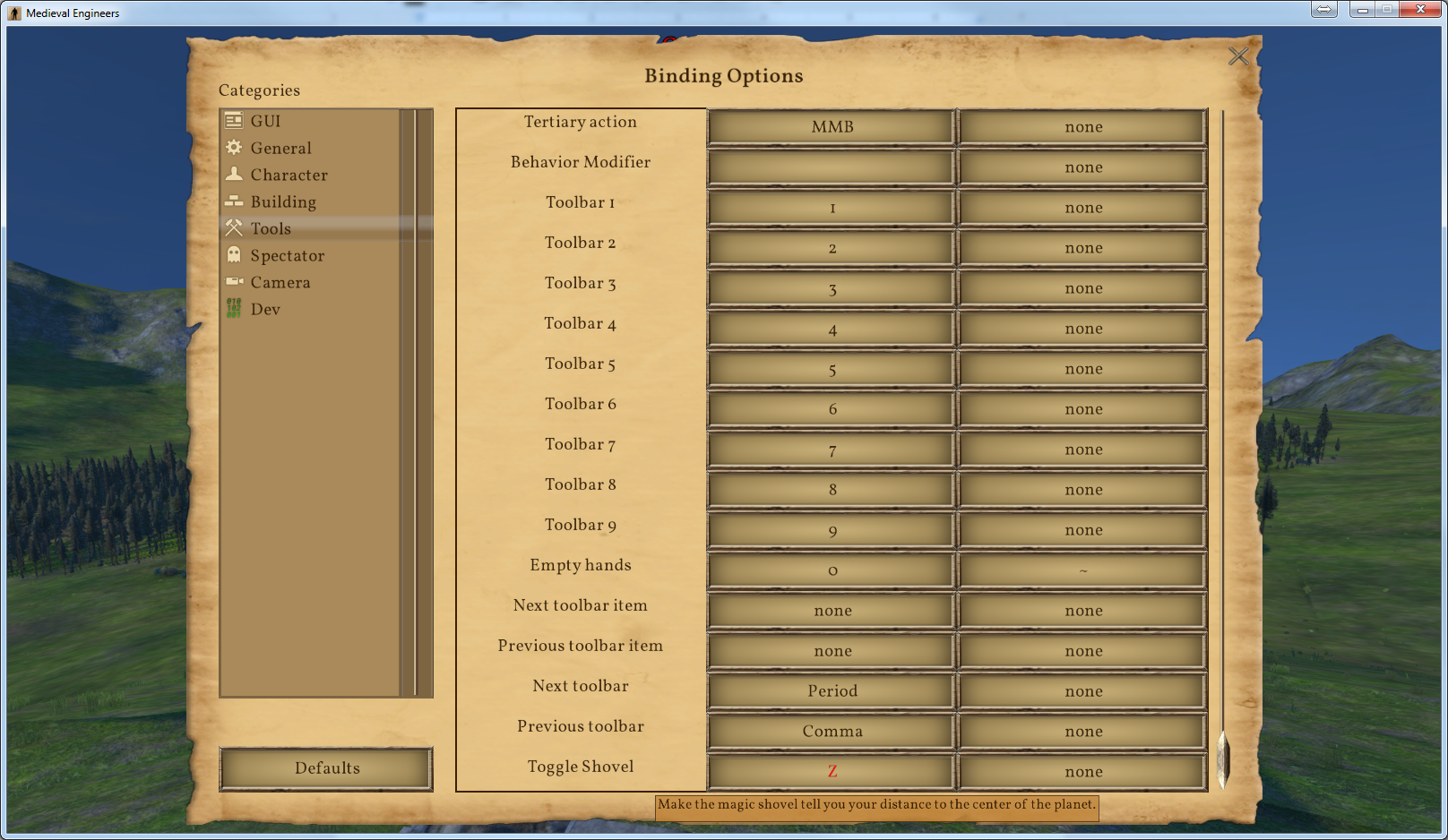 You can rebind it and everything, great! Quit the game and return to Windows.

That takes care of the first step. Now, we get to a slightly harder task, creating object builders (the name we use for our data classes) and the behavior component itself. It’s going to get technical now!

Go into the Data/Scripts folder, and create 3 files:

These three files will contain your code, here are the contents of each file. These files are described further in this guide:

Phew, that was a lot of copy-pasting. If you did it right, you now have three files with some content. Now, let's quickly cover what the code in each of these files does. First, in the MyObjectBuilder_SmartDiggerToolBehaviorDefinition.cs file, we specify the Object Builder. An Object Builder is the class that receives the data out of the SBC files, and loads it into memory.

Then, in the MySmartDiggerToolBehaviorDefinition.cs file, we create the Definition class. A Definition class receives an Object Builder and stores it in a code-friendly way. So when you load data from a file, it is in primitive data form (basic variables), but the code may require special classes instead. The definition is there to transform these values.

Finally, in MySmartDiggerToolBehavior.cs we have the actual implementation of the tool behavior. It receives the definition, and it performs the actual game logic here.

We recommend the namespace contains your Steam ID, as the steam username is not guaranteed to be unique, and namespace clashes can get nasty! Since I am writing this, I set it to KeenExample12345678901234567, feel free to change this (in all 3 files) to your own. You can find your steam id by going to a site like https://steamid.io/ and entering your steam id, or searching the Medieval Engineers log file, look for the line that says Steam.UserId:, and copy the number following it.
Tip 03: Code namespaces

Now if you load up the game… You will notice absolutely no difference. This is because we still need to connect the shovel definitions to the new object builders!

So exit the game again, and now we’re going to borrow a file from the core game.

Go to steamapps/common/MedievalEngineers/Content/Data/Items/Equipment, and copy Shovel.sbc into your mod’s Data folder. After pasting it in, open it in the text editor, and we’re going to have to do some find-and-replacing of some types! Now, this file contains two shovel definitions, the wooden shovel and the iron shovel, so we have to find and replace elements twice. Once for each shovel.

Now, this article is written for the release of 0.5, so the line numbers might be different in the future. The logic remains the same, so you will have to look for similarities.

Next up, we need to alter the XML for the behaviors themselves. On line 73 and 74 you will find the data for the tool behavior and all of its settings. We’re going to make it use our new class as well. The file contains three different tool behavior definitions, one for WoodenShovel (at lines 73 and 74), one for IronShovel (at lines 103 and 104), and finally, one for ShovelCombat (at lines 133 and 134), though the latter is currently not used by the game.

Replace the first two lines with the new object builder for each entry.

With this out of the way, load up the game, your world, and now it should be working! If the shovel is available in the game, and you can use it, that means we didn’t break it! That means we’re now finally at the point where we can start making the functionality of the mod!

Let’s start by adding the input handling to the shovel, as this is one of the new features in the game, and it’s really simple to set up! Open up MySmartDiggerToolBehavior.cs and after the m_definition variable declaration, put the following code:

Then in the Init function, after m_definition gets assigned, add the following bit of code:

And then add the following three functions into the class’ body, after the Init function has its closing }.

Oh my, that was a bit of code copy-paste! Feel free to take a second to study what you just put there, it’s basic functionality, but it works quite easy after you get the hang of it! Then, load up the game, and press the Toggle Shovel key! (Bound to Z) You should see a message on your screen now. Congratulations, you made your first input bound function!

Of course, this is not what we wanted, our goal was to display our distance to the center of the planet after all. So now we will do just that.

We are going to replace the ScanAltitude function. So delete the body of the function, and replace it with this code. Change it so that the function looks like this:

And that’s it! Now, every time you press the shovel key, you will get a message showing you how far you are from the center of the planet!

We are going to end the tutorial here. There are many more things we can do to the shovel tool, that will show you more of the advanced modding options in the game, but for now, you can enjoy playing with your custom shovel mod.

We’ve attached a copy of the fully functional mod’s source to the document, and you can find the first part’s result on the Steam workshop.

For a fun exercise in understanding, try to do the same thing to the pickaxe. Can you figure it out?

Good luck, have fun modding it, and we’ll see you in part two of the tutorial!