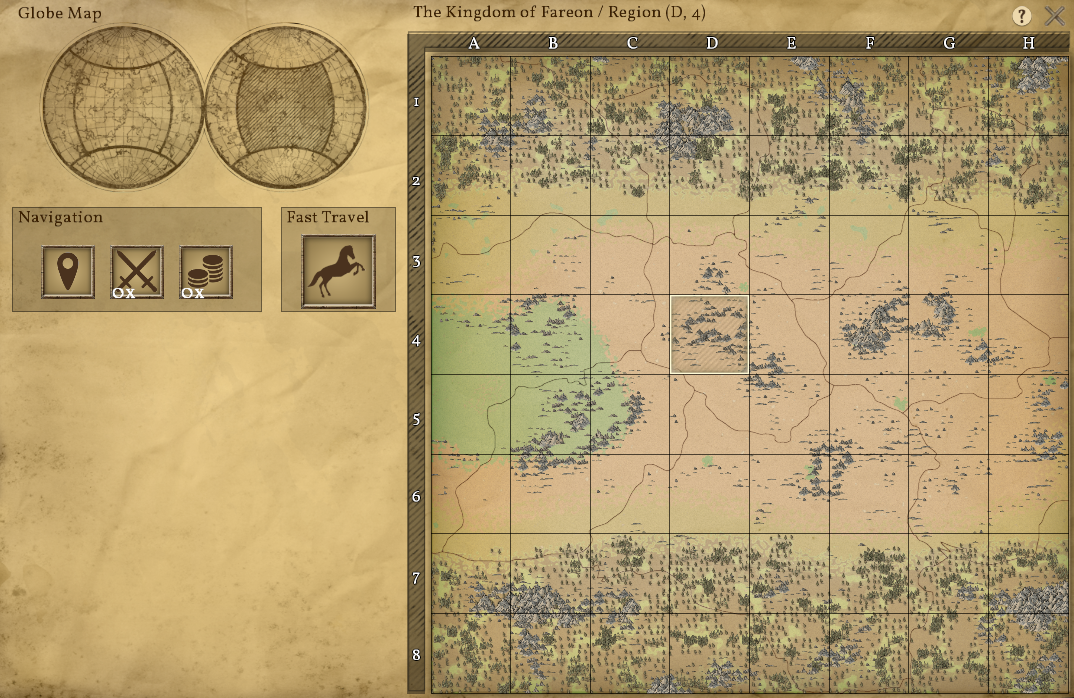 Fareon, selected in the upper left corner, and its regions. Double-clicking a tile will show the areas contained within that region in a similar manner.

The World Map is accessed, by default, using

. It features a visual representation of the planet's surface as well as a coordinate system that helps the player identify his position as well as his allies' positions in a reliable manner. The planet is divided into Kingdoms, Regions and Areas.

The kingdoms are identified by their names:

The absolute position of the selected tile can be seen right above the World Map.

Trivia: the names of the kingdoms are derived from their positions in the planet: Up, Right, Down, Left, Front, Back. 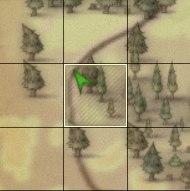 represents taxes due.
The Navigation options are a set of shortcuts that help the player keep track of events happening in the world. The first button, a

position marker, automatically sets the selected area as the one the player is currently in. The second button,

two crossed swords, cycles through areas which have combat occurring inside them. This includes both PvP and PvE combats (e.g Barbarian's attacks). Finally, the third button, a

stack of coins, cycles through areas which have a

Large grids are represented on the map based on the number of blocks they contain. If a grid crosses an area border it will be shown in both areas. Each grid size has its own icon:

A region which contains an area controlled by the player.

An area controlled by the player, showing its personal banner.

Ownership of areas that are claimed is shown on the map disregarding if the owner is your Ally, Enemy or is Neutral. In the region view, a coloured shield indicates if there are Own, Enemy or Allied claims. Green stands for own claims, Red for enemy claims and Blue for Allied claims. The shield might be split up into two parts indicating that both the claims shown are available. The area view of a region shows each individual claim, where the Green-Red-Blue scheme occurs again. Claims also show the personal banner of the player who owns the claim, and moving the cursor over the claimed area, it will show the area name and the owner of the area itself.

The Fast Travel is a feature that allows, as the name says, to travel long distances in short periods of time. In order to use it, press the Fast Travel button and then select the area you want to go to. A confirmation text will ask if you really wish to fast travel to the selected area. After accepting, you'll get teleported directly to the requested area. Fast Travel has different settings that can be defined in the advanced options regarding your world. In these settings, you can set a fast travel cooldown, fast travel max distance, etc.